We got to the Wolfkiel shelter trailhead at around 8:30PM after stopping at Subway to grab some dinner. It's a short walk to the shelters, but it was honestly a really hard night hike. There was a really thick fog that made it hard to see anything further than about 10 feet in front of you. Also, your breath would mist up in the headlamp beam, making it even harder to see. We eventually found the shelter, but we did fumble around a bit since there were a lot of branching paths to other shelter areas. We ended up with 4 people in the shelter because the one who was going to hammock decided not to. It was a touch cramped in the shelters for sleeping, but it worked out ok. We started out the day on the early side (~7AM wake up). I slept fairly well. I've learned to bring earplugs any time I'm in a shelter and I'd generally recommend them any time you are in the outdoors just in case. I had oatmeal with peanut butter powder and brown sugar for breakfast as well as some Cusa instant tea. I was skeptical of instant tea, but it honestly was pretty ok. It tasted largely like what it was supposed to. It was closer to real tea than instant coffee is to real coffee. That said, I don't think it's really worth it over tea bags unless you are on a really long hike and won't have the opportunity to burn the tea bag.

We were on the trail by 8:30AM. It was supposed to rain to some extent all day, but in reality, I wouldn't have even called it a light sprinkle. I started out with just my windshirt (no rain jacket) on and quickly moved to just my baselayer. It was quite wet, though- Tons of wet leaves on the ground, mud, and, of course, streams on the trail. The first part of the trail descends down into the valley to a picnic area along the bike trail before heading back up (which is a consistent theme of this trail). The first stop at the top is a quite nice overlook of the river and the main road bridge in the park. We made really good time on the trail. We got to our previous lunch spot very quickly into the hike, followed by the second scenic overlook before heading back down into the valley. We had lunch at a shelter along the bike trail at about 11AM. For lunch, I tried have a Probar plus a few snacks. One of my friends from our hiking group had recommended them as a meal replacement since they are about 400 calories for 3oz or so. It tasted pretty ok. I would definitely be up to try these as an easy trail lunch. Lunch is the meal I like preparing the least on the trail, so an easy substitute is sometimes welcome.

Once we got going again, we had to follow the bike path for a short bit before crossing the railroad tracks and heading up out of the valley again. We saw a group of Trail Life USA on the way up. I'd never seen one in the wild before. I think they might have been camping with us the night before.

For this section, we stop following the Gerard Loop Trail and get on a white marked trail. It includes a very long up and then a very long down before heading back up to join the Gerard Loop again. The down was pretty though. There are a lot of tree roots sticking out on the trail and they were very wet. I slipped a few times and fell once. Fortunately, I didn't hurt anything. There are a few stream crossings through this section, but they are mostly fairly easy. Once we got back up to the Gerard Loop, we had the option of following a smaller section straight to the Cow Run shelters or to take a detour through the petroleum center (which adds on another 5 miles). We opted to take the shorter route.

A bit on, it started to rain pretty hard. We stopped under some trees to put out rain gear on. Of course, by the time we did that, the rain pretty much stopped. We begrudgingly took our rain gear off a bit further up the trail.

We weren't sure if there was going to be any water at the shelters, so we stopped to filter water at Cow Run before finishing out the trail. My BeFree was pretty sluggish, I think because it had dried out over its months in storage. It took quite a long time to filter 2 liters of water. We got to the shelter at around 1PM. We got some wood, started a fire, and got our gear setup. Since it was still rather early, most of us took a nap. When we got up to eat some dinner, it had started raining for real and the temperature had also dropped somewhat. We set up tarps on either side of the adirondack entrance to block the wind, which had gotten pretty strong. After that, we ate dinner, shared some scotch and some stories and headed to bed.

Surprisingly, I was actually able to finish my dinner on this trip. Typically, I only want to eat about half of what I have. I guess most people have a bigger appetite when they hike, but for whatever reason, mine is typically smaller.

I slept somewhat fitfully. Since I was in a shelter, I brought ear plugs. I cut them down a bit, but they were still too long for someone who doesn't sleep on their back. Also, despite pulling my quilt up to the top of my pad, I still had some drafts around my shoulders because I could not get the quilt around the width of the pad without leaving. I'm really thinking of getting a wider quilt with a draft guard and a wider pad. 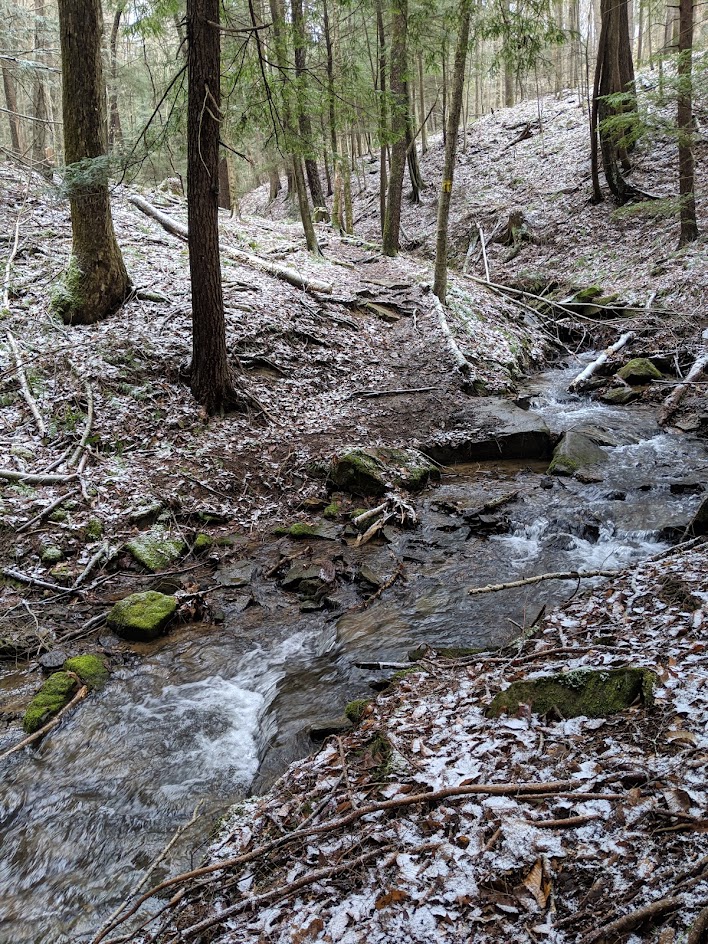 Day 3 started out cold, obviously. It was snowing gently and there was a dusting over the whole area. I had some snacks for breakfast since I knew we'd be grabbing lunch on the way out. We started out hiking pretty quickly to warm up and catch up with the rest of the group (who'd gotten moving a bit earlier). The first part of the trail was fairly easy-going. A bit in, though, the trail turned into hiking up a stream. Since I was in trail runners, I slowed down a bit in this section to try to avoid getting too much water splashed up into my shoes. I was surprised how much water the trail runners were able to absorb before I felt it. Between how fast I was going and the wool socks, my feet stayed pretty warm, although the initial splash was still quite cold.

We passed a few backpackers going the opposite direction. They had pretty large packs on to be day hikers, so I assume that they were coming in for the week. They said hi and kept on going.

It was really cool to see some of the streams flowing that were frozen the last time I was there. Plum Dungeon Falls looked quite good, although I missed the sign for them. According to my group, the sign had fallen over text-side-down. We caught up to the rest of the group as we hit the road, which we stayed on instead of following the path back to the parking lot. It seemed a lot easier to get up the hill on this trip compared to last one. I'm not sure, but it might be because the road wasn't covered in ice.

Coming up to the parking lot, there was a huge amount of wind. Enough to make my face and hands hurt. Fortunately, I knew we were close, so I just powered through until we got to the car. Once we got changed, we headed over to the Blue Canoe Brewery in Titusville. We had to wait a bit for them to open, but the food and beer were worth waiting for. 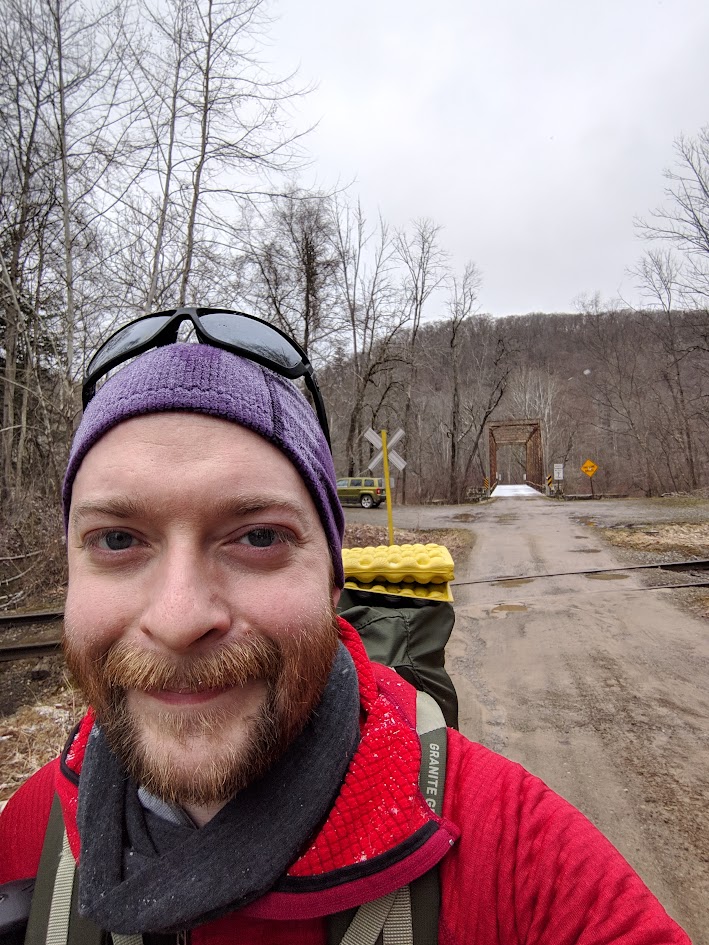 All in all, I think I ended up packing way too much on this trip- partly because the weather was going to be so different over time and partly because I thought we were going to be spending time outside the shelter. I brought a tarp instead of a tent, but my kit was otherwise mostly the same as for other group trips.

This was my first outing with trail runners. My old shoes were more of a low-cut hiking shoe, so I was already used to not having a huge amount of ankle support. These weigh less and fit better. I had no trouble with blisters or bruises. It did take a while to get used to them. The first 2 miles or so, I thought my feet were gonna be hurting at the end of the day. That feeling went away eventually and my feet felt perfectly fine.

We hung this from the roof of the shelter and used it as our main light source all evening. It's 6oz, but it seems totally reasonably as a piece of group gear.

It never really rained super hard, so the Houdini dealt really nicely with the wind and what little precipitation there was. The only downside to this windshirt is that I still end up taking it off eventually. I'd love to get something even more breathable.

I didn't use these for the rain, but they really helped with the wind. Once my hands would warm up, I could just push them up my arm instead of stopping to take them off.

I was plenty warm sitting around camp, even when it got cold. The fit is much better than my old Ghost Whisperer.

I'm honestly not sure why I brought this. The last time I stayed in an adirondack, I didn't use it. Not sure why this would be different. This stayed in my pack.

It just wasn't cold enough to warrant bringing these. I just put on my wet trail runners when I needed to step outside, which wasn't often because we were all staying in the shelter.

I brought these because I thought it was going to be super cold Saturday into Sunday, but my hands never really got that cold. I might still bring the possumdown gloves in the future, but it would be as insurance because sometimes my hands get really cold for no reason.

Next Gen Projects in Jira

How to Install Backslide on Windows